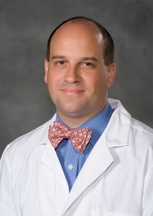 Dr. Michael Amendola is a practicing vascular surgeon at the Central Virginia VA Health Care System (CVVHS) in Richmond Virginia. He is the Division Chief of Vascular Surgery and the Head of The Vascular Duplex Laboratory. Dr. Amendola obtained his undergraduate and graduate degree in Chemistry from The College of William and Mary in Williamsburg, Virginia. He subsequently worked as a Research Associate for Merck and Company in Rahway, New Jersey utilizing computer aided rational drug design. He then undertook funded research in Department of Genetics at Virginia Commonwealth University School of Medicine (VCU-SOM) In Richmond, Virginia. He started and completing medical school at VCU-SOM in 2002. He completed his general surgery residency and vascular surgery fellowship at Virginia Commonwealth University Health System in Richmond Virginia. He practiced in private practice in Georgia for two years before returning to VCU-SOM and CVVHS practice. Dr. Amendola is a full-time surgeon at CVVHS since 2011 and he holds the academic rank of Professor of Surgery at VCU-SOM. His duties include the education of nursing students, advance practicing nurses (NP), medical students, general surgery residents, plastic surgery residents, podiatric residents, and vascular surgery fellows. Dr. Amendola is clinical consultant to VA efforts as it pertains to the successful application of 3D Printing Technology at the point of care. Dr. Amendola Completed his Master’s in Education in the Health Professions (MEHP) from Johns Hopkins and is Adjunct Faculty in the Johns Hopkins School of Education. Dr. Amendola is boarded in General and Vascular Surgery. He also holds a separate certificate as a Registered Physician in Vascular Interpretation in his role as the Head of The Vascular Duplex Laboratory. Dr. Amendola is a Fellow of the American College of Surgeons (FACS), American College of Surgeons Master Educators, Fellow of the Society for Vascular Surgery (FSVS), active member and committee participant of the Southern Association for Vascular Surgery (SAVS), active member and committee participant Association for VA Surgeons (AVAS), and member of the Virginia Chapter of American College of Surgeons. Dr. Amendola has partnered with medical industry for the past decade including being involved in speakers’ bureaus, served as a key opinion leader (KOL) and design medical/surgical educational materials for industry. Dr. Amendola is considered a leader in the field of vascular surgery as evident in his multiple local, regional, and national presentations. Dr. Amendola has worked with the legal field as an expert witness as well as case reviewer. Additionally, Dr. Amendola has over twenty peer-reviewed publications since 2020. Dr. Amendola takes pride in serving the veteran population, educating the next generation of doctors and surgeons, participating in the application of innovative technologies in the clinical field of surgery as well as undertake his academic pursuits.