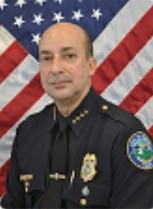 Police policies and procedures, use of force, vehicular pursuits, vulnerabilities, responsibilities and liabilities in regard to business, personal and residential security.

Richard Blom is law enforcement professional with over 39 years of experience. His last position was as the Chief of Police of the City of Doral, Florida. The policing philosophy and operational strategies that he introduced coupled with the partnerships that he created with the community and media contributed to a significant reduction in crime every single month during his tenure as chief. During his tenure as chief the department received several prestigious awards and recognitions for community policing practices. Prior to his appointment as chief, he was the Assistant Chief of the Miami Police Department where he started his career in 1975. During his career with the Miami Police Department, he held command level positions in all three of the department’s divisions. In addition, he has held a number of high-profile assignments such as Commander of the Office of Emergency Management and Homeland Security, Bomb Squad Commander, as well as the Commander of the Crime Prevention and Community Policing Unit where officers under his tutelage were presented with a national community policing award at the 2012 IACP Conference. In November of 2004 he was selected to lead the newly created Office of Emergency Management and Homeland Security. This office was created in in order to establish a comprehensive program to address prevention, mitigation, response and recovery procedures to natural disasters as well as terrorist-initiated events. He also administered the Urban Area Security Initiative (UASI) grant for the Miami Police Department. This robust grant was utilized to better prepare the City of Miami as well as first responders throughout the South Florida Region prevent, mitigate, respond to and recover from catastrophic events. The grant has proven to be not only a mechanism to obtain equipment and supplies but also a building block for progressive training, exercises and drills as well as accepted concepts, methods and practices. Under his leadership the Miami Police Department’s newly created Office of Emergency Management and Homeland Security quickly became recognized as a leader in all aspects of Emergency Management as well as Homeland Security concerns. He also developed policies, procedures and guidelines in regard to the recruitment, hiring, training and the promotional process of all sworn personnel and actively participated in the procurement of departmental grant programs. He was also responsible for developing policies, procedures and guidelines in regard to inventory control of all departmental equipment as well as the storage, maintenance and retrieval of police evidence. From 1987-1995 he was in command of the Crime Prevention Unit, Special Investigations Unit, and a patrol district and during that time received his Crime Prevention Practitioner Certificate. He was responsible for numerous department-wide training efforts and many successful operations in the areas of Dignitary Protection, Organized Crime, Anti-Terrorism, Money Laundering and Drug Interdiction. While in command of the Bomb Squad, he visited Israel and initiated a training program which gave the members of the bomb squads from both Miami and Tel Aviv an opportunity to visit each other’s country and exchange information, as well as operational techniques. He is the recipient of numerous departmental commendations, awards, and medals for both operational efficiencies, as well as administrative excellence. He is a graduate of the prestigious F.B.I. National Academy, as well as a graduate of the Kennedy School of Government at Harvard University. He holds a Bachelor’s degree in Professional Studies from Barry University and Master’s degree in Public Management from St. Thomas University. Born and raised in New York City he is the youngest of three sons of Puerto Rican immigrants.