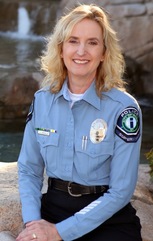 Kimberly Cherney has worked in the humane animal welfare and law enforcement fields for over 32 years. Kimberly worked for the City of Brea Police Department as a Police Officer prior to her employment in the animal services profession. She worked for the County of Orange and the City of Costa Mesa as an Animal Control Officer for three years prior to being hired by one of California’s fastest growing and most progressive cities, Irvine. While working for the City of Irvine’s Police Department, Kimberly worked as an Animal Services Officer, Senior Animal Services Officer, Animal Services Supervisor, Animal Shelter Supervisor and Animal Shelter Interim Manager. Kimberly retired from the City of Irvine in 2018. While working for Irvine, and following her retirement, Kimberly held the position of Board Member for the National Animal Care & Control Association (NACA). Following her retirement from Irvine, she became the Interim Executive Director for NACA. In this position, she provided extensive consulting and instruction for many members and municipalities throughout the United States. Kimberly currently works as a private consultant for the animal care industry as well as provides forensic analyses and litigation support to law firms and municipalities needing assistance in animal-related matters.