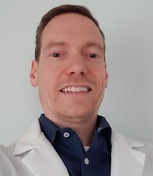 Since completing my Emergency Medicine Residency in 2004 I have worked in a variety of Emergency Departments. Initially I worked with a private democratic group that staffed 5 Hospitals. These emergency departments ranged from small, single coverage to larger departments treating over 70,000 patients annually. There was also diversity in geography ranging from rural to urban. While serving on the board of directors, my private group merged with a National Group further increasing my vaired experiences in Emergency Medicine. I joined the Army National Guard in 2001 rising to the rank of Major. I served as Battalion Surgeon in Iraq in 2005-2006. I received an honorable discharge in 2009 after serving for 8 years. In 2010 I relocated to Syracuse, NY and joined Crouse Hospital as an employed emergency physician. I became more involved with quality and leadership and later became Vice Chair of the Department. I completed ACEP Emergency Department Directors Academy Phase 1-3 and am presently the Chairman of Crouse Health Emergency Department. I also served as interim medical director of a nearby critical access hospital for 9 months. In my role as Chair of the department I work closely with quality and risk management departments. We have built a new department, updated our flow process and become a Comprehensive Stroke Center since I became Chariman. These experiences led to local malpractice attorneys reaching out to me in 2017 to provide expert witness reviews. Since then I have served as an expert witness in nearly two dozen cases including working with NYS attorneys and well as US attorneys. I have a variety of practice experiences and am passionate about safe and quality care.