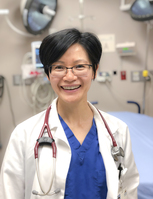 Since 2003, Dr. Zheng has worked in a variety of clinical settings, including academic teaching centers, a VA healthcare system, community hospitals, and a rural critical access hospital. Dr. Zheng is an Assistant Clinical Professor at the University of California San Diego and University of California Riverside. Since 2013, she has led an annual teamwork exercise for 350 students and faculty from three professional schools, which have been featured by the San Diego Union-Tribune and the Agency for Healthcare Research and Quality. She has presented at scientific conferences on interprofessional collaboration and pitfalls in emergency medicine. While working as a Medical Consultant for the VA Office of Inspector General, she published extensively on quality of care issues at the Veterans Healthcare Administration and briefed members of Congress on the findings. Some of the reports covered allegations of mismanaged Code Blue, clinician competency, resident supervision, nursing home abuse and neglect, inappropriate hospital discharge, and poor access to care. Dr. Zheng has received teaching awards from residents at the University of California San Diego and the Rising Star Award from the American College of Emergency Physicians for excellence in public speaking. In 2018, she received the VA Inspector General Values Award for her dedication to the highest standards of professionalism, character, and integrity.