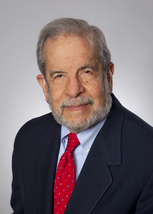 Mark I. Harrison received his LL.B. from Harvard Law School in 1960 and is a Member of the Phoenix, Arizona law firm Osborn Maledon PA. He is a past President of the State Bar of Arizona (1975-76), the Arizona Bar Foundation (1991) and the National Conference of Bar Presidents (1976-77). He served on the Members’ Consultative Group for the ALI Restatement of the Law Governing Lawyers and was President of the Association of Professional Responsibility Lawyers (1992-93) and the American Academy of Appellate Lawyers (1993-94). From 2000-2003, Mr. Harrison was a member of the ABA Ethics Committee and from 2003-2007, Mr. Harrison chaired the ABA Joint Commission to Revise the Model Code of Judicial Conduct. Mr. Harrison served as Chair of the national Board of Directors of Justice at Stake–– an organization dedicated to the preservation of an independent judiciary from 2011-2016. As an adjunct professor, Mr. Harrison taught the required course in legal ethics at the University of Arizona Law School (1994-97) and at Arizona State University School of Law (2001-2010) and is on the faculty of the National Judicial College. He regularly serves as an expert in matters involving legal and judicial ethics. Mr. Harrison has been the recipient of several awards including the ABA Michael Franck Award for Professional Responsibility, the Walter E. Craig Lifetime Achievement Award from the State Bar of Arizona, the Learned Hand Award from the American Jewish Committee, the Burnham “Hod” Greeley Award from the Judicial Division of the ABA, the Charles W. Kettlewell Legal Ethics Advisory Award from the Association of Professional Responsibility Lawyers and the Arizona Chief Justice's Distinguished Service Award.