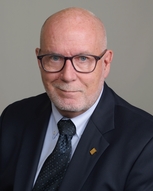 B.S. in Pharmacy, University of Minnesota

Dennis is an Arizona-based pharmacist with a broad set of practice experiences acquired over 40 years of pharmacy practice. He served in the United States Air Force as a pharmacy officer, and opened and operated a community pharmacy after leaving active duty. Dennis has served as Director of Pharmacy at three hospitals, two in rural areas, and the other, an 800-bed facility with an attached children’s hospital in an urban setting. Dennis was a founding faculty member at the Midwestern University College of Pharmacy-Glendale, eventually serving as its Assistant Dean. As the Pharmacist in Charge of the Humana Mail Pharmacy in Phoenix, managing pharmacy practice for a staff of 700 that filled over 35,000 prescriptions each day. Dennis has worked for the last decade as the Senior Director of Pharmacy Regulatory Affairs for Express Scripts, supervising a team that covered all 50 state boards. He recently retired from that position. Dennis has extensive experience in standard of care and pharmacy regulation. He was a member of the Arizona State Board of Pharmacy for 23 years, serving as its president four times. He was appointed to the board by five governors, and was the longest serving board member in the history of the agency. Additionally, he served on the Executive Committee of the National Association of Boards of Pharmacy (NABP) for over 10 years, and is a past president of that organization. Dennis also served for six years on the board of directors of the Accreditation Council for Pharmaceutical Education (ACPE). In that role, he helped guide the re-write of accreditation standards for pharmacy schools across the country. Dennis is currently licensed in Arizona and Minnesota and was previously licensed in California, Oregon, Louisiana, Tennessee, Kentucky, Arkansas, and Nebraska. All of his licenses were or continue to be in good standing. Dennis has been engaged in over 60 matters and testified at trial 4 times.