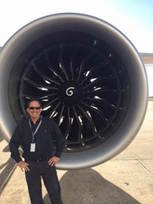 Nicholas Drivas is a well-known and respected member of the commercial air transport community. He has held high-level management positions with a number of domestic and foreign air carriers including Southwest Airlines, Hawaiian Airlines and AirTran Airways. He has also worked for engine manufacturer General Electric (GE) in positions focused on engineering, maintenance, reliability, quality and operations. His experience includes the areas of design, certification, production, operations and maintenance. Mr. Drivas is also knowledgeable about the interfaces between and among these various disciplines and regulatory agencies. Mr. Drivas holds both Commercial Instrument Pilot and Airframe & Power Plant technician licenses. He is also a FAA Designated Airworthiness Representative. He has been quoted as an expert in numerous periodicals devoted to the aviation industry. He was invited to the National Aeronautics and Space Administration (NASA) to “benchmark” best practices by reviewing NASA Kennedy Space Center (KSC) operations including flight hardware DO-160 testing, operations and logistics for the STS Orbiter program utilized for Low Earth Orbit (LEO) space flight electronic applications. Mr. Drivas also has served on government-industry committees including the Aging Transport Systems Rulemaking Advisory Committee (ATSRAC) during which he provided valuable input on aging aircraft wiring while serving as the Director of Quality for AirTran Airways. This resulted in changes to the methods and practices for the inspection of aircraft wiring throughout the industry. He served as the Vice President of Corporate Quality, Certification and Product Support Engineering for LiveTV LLC. He currently is the Managing Partner of The Drivas Group, LLC which provides expert witness, Aircraft Engineering and Designated Airworthiness services. He has been on the witness stand 2 times and deeply involved in 3 cases and many depositions.